Vincent Ingrao is an American television writer, and he's written episodes for The CW television series Roswell, New Mexico. He is an LGBT writer who often works with Rick Montano.[2]

Prior to working on Roswell, New Mexico, Ingrao and Montano wrote for the TV series Turnt (2018). In May 2019, Montano confirmed that he and Ingrao would return as writers for season 2.[3] 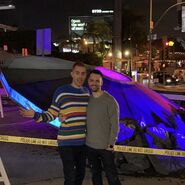 Retrieved from "https://roswell.fandom.com/wiki/Vincent_Ingrao?oldid=17361"
Community content is available under CC-BY-SA unless otherwise noted.