The Wild One is the second book in the Roswell High book series written by Melinda Metz.

Isabel: From the moment she hears the roar of Nikolas's motorcycle, she's hooked. This new guy in town seems to understand exactly how she feels and thinks, exactly what she needs. He's someone willing to let her be what she was born to be . . . the wild one.

Alex: He's jealous of Isabel's new boyfriend. Worse, he fears that Nikolas is dragging Isabel deeper and deeper into danger. If Isabel's not careful, Sheriff Valenti will discover the truth about her. And if that happens, no one from Earth will be able to save her . . . 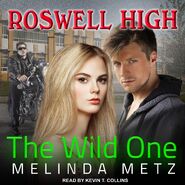 Retrieved from "https://roswell.fandom.com/wiki/The_Wild_One?oldid=15625"
Community content is available under CC-BY-SA unless otherwise noted.