The Watcher is the fourth book in the Roswell High book series written by Melinda Metz.

Max is dying. No one wants to believe it, but he knows it's true. And as the end grows closer, he can only think of one thing: Who will protect Liz if he's not here?

Liz can't stand watching Max suffer. She's determined to find some way—any way—to save him. But the only way to help Max is to risk her own life. Is she willing to die for the one she loves? 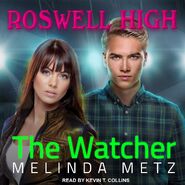 2019 audiobook
Add a photo to this gallery

Retrieved from "https://roswell.fandom.com/wiki/The_Watcher?oldid=15624"
Community content is available under CC-BY-SA unless otherwise noted.