The Vanished is the seventh book in the Roswell High book series written by Melinda Metz.

Max is on a mission to save Alex, who is stranded on the home planet. Alex may be lost or wounded—or worse. To get Alex back, Max knows he'll need one of the Stones of Midnight. If only he knew where to find one . . .

Liz understands that Max can't rest until he finds Alex. And she's been busy herself—spending time with Roswell newcomer Adam. She's been having so much fun with Adam that Max is in danger . . . of being forgotten.

Chapter 1: Max wakes Michael from a nightmare about Cameron and DuPris, and Michael learns that Cameron has left in the night. The group goes out to the ruins of the Project Clean Slate compound to find the ship. They connect to dig up the ship, but abort the mission when a car approaches. Back home, Max connects to the collective consciousness and confirms that Alex is alive, but the collective isn't sure about what to do with him.

Chapter 2: Isabel, upset about Alex, writes him a letter. She goes out to the desert in the night and launches the letter on a little rocket, and while out there, she goes to the site to find that the ship has been removed. The next day, Michael and Adam go out for breakfast and run into Michael's social worker Mr. Cuddihy. After a lecture about running away, Cuddihy informs Michael that he's received an inheritance from Ray Iburg, and Cuddihy will help Michael, who's seventeen, get legally emancipated.

Chapter 3: The school is called to the auditorium where Principal Shaffer announces the new interim sheriff Kasey Dodson. Liz and Max discuss the ship and the possibility that the new sheriff could be another Project Clean Slate agent. They slip into a supply room to make out, and the collective consciousness abruptly surges through Max to experience it with him and he has to block them out. Michael and the group cleans up the UFO museum.

Chapter 4: The group discusses their options on getting Alex back to earth now that the ship's gone, including using the Stone of Midnight, although DuPris has it. Michael and Maria drive out to the old ranch house where the previously confronted DuPris. The place brings back traumatic memories and Maria breaks down, and Michael comforts her. At the apartment, Max uses his powers to check Adam and Isabel for any buried memories, and they see that DuPris took them to a cavernous cave. Meanwhile, Liz and Adam check DuPris's office for the Astral Projector, and they find a photograph of Sheriff Valenti shaking hands with Alex's father Mr. Manes in Valenti's Project Clean Slate office.

Chapter 5: Maria gets home late. Her mother has waited up for her, and Sheriff Dodson is waiting with her. Max tells Michael about the picture of Valenti and Mr. Manes. After Michael leaves, the collective consciousness abruptly connects to Max again. He reaches out to check on Alex, but he finds him terrified, and an unfriendly force within the consciousness pushes Max away. Meanwhile, Adam peaks into Liz's dream orb; he saves her from a nightmare and they dance together in the dream.

Chapter 6: At school the next day, the group discusses Isabel's memories of the cave. Kyle Valenti confronts Liz in the hallway outside her biology class, wanting to know about his father, and shatters a glass trophy case in anger. Isabel visits the Manes household and comforts Mrs. Manes, and she sneaks into Mr. Manes's office and copies files from his computer. Isabel gives the files to Max, but they're encrypted. At the Crashdown Cafe, Maria sees a customer wearing a T-shirt for the Carlsbad Caverns, which she connects to Isabel's memory. 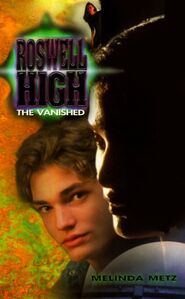 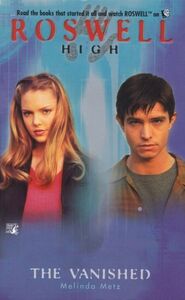 Retrieved from "https://roswell.fandom.com/wiki/The_Vanished?oldid=15623"
Community content is available under CC-BY-SA unless otherwise noted.