176
The Stowaway is the sixth book in the Roswell High book series written by Melinda Metz.

Michael: He's still having flashbacks of his escape from the underground compound. Only Cameron, the mysterious girl he met behind bars, seems to understand him -- and realize that the sheriff may be gone but an even more dangerous enemy is out there....

Cameron: She fell for Michael while in the compound...spying on him for Sheriff Valenti. Now she feels guilty, and wishes she could tell him the truth. But how can she be honest -- without losing Michael? 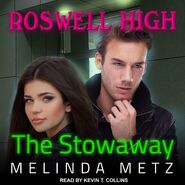 Retrieved from "https://roswell.fandom.com/wiki/The_Stowaway?oldid=18576"
Community content is available under CC-BY-SA unless otherwise noted.