170
The Outsider is the first book in the Roswell High book series written by Melinda Metz.

Official synopsis from the original Archway edition back cover:

Liz has seen him around. It's hard to miss Max—the tall, blond, blue-eyed senior stands out in her high-school crowd. So why is he such a loner?

Max is in love with Liz. He loves the way her eyes light up when she laughs. And the way her long, black hair moves when she turns her head. Most of all, he loves to imagine what it would be like to kiss her.

But he knows he can't get too close. He can't let her discover the truth about who he is. Or really, what he is....

Because the truth could kill her.

The Pocket Pulse and Pocket Books editions made slight changes to the back cover description, most notably changing Max's description from "the tall, blond, blue-eyed senior" to "the tall, mysterious senior". This is likely to reflect Max's different appearance in the television series, since Max's actor Jason Behr had dark hair and his image was used on the cover for these editions.

In chapter 1, Liz Ortecho and Maria DeLuca are waiting tables at the Crashdown Cafe when Max Evans and Michael Guerin enter and take a table. Two patrons at another table get into a fight and one pulls a gun and shoots Liz in the stomach. Despite Michael's protests, Max heals Liz's wound. He then breaks a ketchup bottle and covers her in ketchup, asking her to lie that she just spilled ketchup on herself. Stunned, Liz does so.

In chapter 2, the paramedics tend to Liz but she says she's okay. Max and Michael slip away. Sheriff Valenti arrives and asks questions, but Liz and Maria uphold the lie. Liz goes to the bathroom with Maria to clean up and talk about what happened. Meanwhile, Isabel Evans is panicking at home because she felt Max use his powers. Max comes home with Michael and they tell her about the shooting, and they're all worried that Sheriff Valenti will come for them as a car pulls up.

In chapter 3, it's Liz who's arrived for answers. She and Max talk privately in his bedroom. She shows him his handprint on her stomach from the healing, and he tells her that he's an alien. He melts her bracelet in demonstration. Liz doesn't take it well and leaves. She drives to Maria's and tells her, and they work through their disbelief.

In chapter 4, Michael is at home and about to leave with Max when his foster father, Mr. Hughes, gives him last-minute chores as a power trip to prevent him from leaving. Michael leaves with Max anyway, and they do another search out in the desert for signs of the ship from the 1947 crash, which Max does once a week with Michael. The search turns up nothing and Michael asks Max to drop him off at the cave instead of taking him home. Meanwhile, Isabel prepares for homecoming and visits Alex Manes's dreams.

In chapter 5, Liz and Max are both separately nervous about seeing each other again in class. Kyle Valenti makes a pass at Liz, but she rejects him. Alex tells Liz and Maria about his dream. Max tries to get Michael to ditch with him, but Michael gets Max to go to class. In class, Max and Liz talk but Liz is still nervous around him.

In chapter 6, Elsevan DuPris asks Liz about the apparent healing, which was reported to him by witnesses. Liz conceals it by going over the top, saying she was wearing "RosWool" from sheep that grazed near the 1947 crash site. Before leaving, DuPris points out that a person who could heal would also have the power to harm. Meanwhile, Alex approaches Isabel after her cheerleader practice, but she turns him down.

In chapter 7, Liz, Maria, and Alex run into Michael and Max at the mall. Max reveals to Liz that he can get flashes of memories from her. To create some equity, he shares his memories with her, and she realizes that he's in love with her. Meanwhile, Isabel and her friend Tish are also at the mall, and they run into Stacey who has clawed her own face during of a nightmare the night before.

In chapter 8, Sheriff Valenti calls Liz out of class to show her handprint marks on a dead body in the morgue. The man was killed by an alien, and Valenti knows that Liz had a handprint mark because his son Kyle saw it. To get her to talk about who healed her, he tells her that he's a member of Project Clean Slate whose "purpose is to track down alien beings living in the United States and make sure that they pose no threat to the human population." Liz sticks to the lie.

In chapter 9, Liz returns to school and runs into Max. They ditch together and Liz tells him what happened with Valenti, and Max tells her about what happened to him as a child. They decide to have a meeting with everyone who knows.

In chapter 10, Kyle confronts Liz as she and Max return to school. Liz covers that she and Max had slipped away to make out, which angers Kyle and makes him leave. Later, Liz, Max, Michael, Isabel, and Maria have a meeting and they share what Liz learned from Valenti. Maria admits she thinks telling Valenti wouldn't be so bad, and Isabel threatens to kill her. The meeting falls apart.

In chapter 11, Maria meets Alex at the UFO museum and tells him about Max, Michael, and Isabel. Maria is worried about their powers and thinks she needs to go to Valenti for protection. Meanwhile, Isabel goes to the cave. Michael joins her and convinces her to leave, but as they're driving back to town, Sheriff Valenti pulls them over.

In chapter 12, Isabel and Michael return hours later and Isabel is shaken, but Michael thinks Valenti was just intimidating teenagers like he usually does. Max gets them to agree to leave Liz and Maria alone. The next day at school, Liz learns that Maria has told Alex and they want to go to Valenti. She tries to convince them not to, but they seem resolute.

In chapter 13, Liz calls Max over to sit with her, Maria, and Alex at lunch. She tries to act overly cheerful, but the facade crumbles and she tells Max that Alex knows, and she asks Maria and Alex to really look at him to reconsider when Kyle Valenti interrupts. Kyle suggests that Liz is going to prison and gets more riled up that he insults her dead sister Rosa, so Max pins him and starts punching him. Alex pulls him off and stops him from attacking again as Kyle leaves with a bloody nose. After school, Maria waits for Max at his car and they talk, and Max drives her home.

In chapter 14, Max has gathered Liz, Maria, Alex, Isabel, and Michael. They hold hands and Max uses his powers to create a psychic connection between the six of them so they know that they can trust each other. Afterwards, everyone is content with each other, and Michael says he has a plan for what to do about Sheriff Valenti.

In chapter 15, it's homecoming night. Isabel is certain that she'll win homecoming queen, but instead Liz is crowned queen, and Max is crowned king. They dance and kiss. Alex gets Isabel to dance with him, and he tells her that he and Michael dreamwalked on all the guys to undo her influence. Michael and Maria dance. Michael thinks about how the connection Max created is still there and it feels like he finally has a family.

In the final chapter, the plan begins. Maria tells Kyle that Alex has been stabbed, so Kyle calls his father. When Sheriff Valenti arrives, Alex is covered in blood but healed. Valenti questions him about the one who healed him rather than the one who stabbed him, and Alex tells him the guy who healed him went off in a green truck. Valenti takes off in pursuit. Max and Michael are driving the truck and they use their powers to keep ahead of Valenti. They jump out of the truck, letting it go over the edge of a cliff into a bottomless lake, so Valenti will think the healer is dead and gone. They hurry back to the high school so it seems like they never left. Max and Liz meet up, and they kiss again, but Max decides that they can't be together because it puts Liz in danger. But Liz doesn't plan to give up.

Powers portrayed in this novel include: 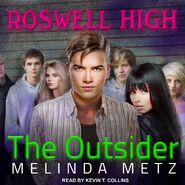