Stay (I Missed You)

Lance Anderson[2]
Stay (I Missed You)[2] is the first episode of season 2 of Roswell, New Mexico and the fourteenth episode of the series overall. It first aired on March 16, 2020.

JUST A MAN WHO WANTED TO DO SOMETHING EXTRAORDINARY — Torn between the heartache of Max’s sacrifice and the joy of Rosa’s resurrection, Liz suppresses her grief to focus on moving out of Roswell with Rosa. Meanwhile, Michael copes with Max’s death in his own self-destructive way, while Isobel focuses her attention on honing her alien powers. Finally, Liz makes an alarming discovery after Rosa begins experiencing mysterious side effects from her resurrection.

Act 1: Flashback to Max and Liz in Max's bedroom that morning as they talk about what happened with Noah, and that Noah mentioned the alighting. Present in the cave, Rosa says they need to get help for Max, but Liz tells her it's too late. Two weeks later, Liz is working at the Crashdown and helping her father apply for citizenship, and Maria visits and mentions that Michael's been ghosting her. At Noah's funeral, Michael loudly arrives late and doesn't sit with Maria. Isobel struggles to make her eulogy, but looks at a photo of Max and speaks indirectly about her love for him instead to get through her speech. In another flashback to the cave, Isobel sobs over Max's body and convinces Michael and Liz to put him in the pod. At the after service, Kyle tells Alex that he'll need to wake up Jesse Manes soon. Maria confronts Michael, and she's understanding and tells him to come by the Wild Pony. Sheriff Michelle Valenti asks about Max, but Isobel says that he's on vacation, which he requested before his death. Liz and Isobel stage a fight to cover up why Max isn't around. Outside, Michael asks Liz about Rosa, who's hiding at Max's place, and Liz is concerned that Isobel is in denial about Max. That night, Rosa sneaks into the Crashdown, but the jukebox goes haywire, a handprint throbs painfully on her chest, and she has a vision of Noah.

Act 2: Liz wakes Rosa from a nightmare of Noah, and they plan to leave for Palo Alto. But Liz is worried about how hard it was to wake up Rosa, so she brings her to the hospital and finds Kyle, who is looking in on Jesse Manes. Kyle runs tests on Rosa and finds that she's completely healed, even of problems that should be caused by her chronic drug use. Meanwhile, Isobel makes a call about the status of Noah's cremation, and in her rage that it isn't completed yet, she shorts out all the lights. At the Wild Pony, Maria's mother has left her care facility and wanders in and mentions Rosa Ortecho. The next morning, Michael returns to his trailer to find a post-it and a guitar, which he returns to Alex. Alex gives him the file on his mother, but Michael gets angry. He makes it clear that he's ending things with Alex, and he walks away.

Act 3: Out in the desert, Isobel practices her growing powers. Michael joins her, and she thinks if she keeps training that maybe she can bring Max back. Michael takes Isobel to Max's pod and shows her scans of Max's heart, which is "shredded" from a massive heart attack from power overuse. At the hospital, Kyle confirms to Liz that Rosa is healthy, and they discuss why only Rosa has a handprint, but not Liz or Michael. Liz and Rosa leave town, and they talk their mother leaving and they sing in the car. After checking into a hotel, Liz breaks down in the bathroom.

Act 4: Rosa has another nightmare of Noah, this time running from him, and she wakes abruptly. She tells Liz about it and, from a picture, confirms it's Noah Bracken and mentions an "alighting". Liz realizes that Max still has a connection with Rosa and that maybe he can be saved after all. At the Pony, Michael flirts with another girl in front of Maria, then gets into a fight with a guy. Alex and Kyle sneak into the morgue, planning to give Max a heart transplant using Noah's heart, but they find that Noah's body has been replaced.

Act 5: Alex threatens the morgue tech and realizes it was Flint who took Noah's body. He calls Flint and learns that he's taking the body to Area 51, where Alex can't access. Alex calls Liz, who's driving back to Roswell with Rosa, and tells what happened. Rosa realizes an oncoming car must be Flint's and causes a crash to stop him. At the Wild Pony, Maria takes Michael outside and confronts him about wanting to hurt her. Liz finds and asks Michael for help "moving a body". Liz and Kyle open up Noah's body as Michael tells them what he's learned about his own biology, but when they get to Noah's heart, they only find "what's left of it."

Act 6: Rosa asks Liz about the heart, and they get into a fight because Liz is unhappy. Although Noah's heart is "shriveled and weak", Liz is determined to use her regenerative science skills to fix it. Out in the desert, Mimi DeLuca wanders from the facility again, and a bright light from an unseen source shines on her. Maria gets another call that her mother has wandered from the facility, and she goes outside to find her but she doesn't see her. At Max's pod, Isobel laments that she can't feel Max, but she feels Noah all the time. With a thought, she uses the imaging machine to check her abdomen, and she gasps at what she sees. Rosa dreams of the gazebo where she first met Isobel and she sees Noah again, but Max stops him this time, and Max tells Rosa to stop Liz from bringing him back to life.

"You know, what I really want to do today here is to tell you about someone, who I love very much. He was a man with an unrivaled capacity for love, who could hold you in his heart… despite distance or rejection. He made mistakes, but he was noble. And he dedicated his life to righting his own wrongs, and the wrongs of others. My wrongs. He was my other half. My better half. I don’t think I’ll ever let him go." — Isobel on her brother Max at Noah's funeral.

"All our years of this, I’ve never said no to you. You push me away, you pull me back in, and I go where you want me. I don’t want that anymore. I don’t want to keep hoping that maybe this time you won’t go. I don’t want to play your guitar. I don’t think we’re good for each other Alex, and I want to be good for somebody." - Michael to Alex on needing to move on.

"Strange creatures with familiar features. The alighting! They’re coming for us, Maximo!" - Max trying to communicate with Rosa as Noah in her nightmares.

"Hope screws people up. Hoping that your family will come and save you from the system. Hoping that anyone can be saved at all." - Michael to Maria on why hoping is bad.

"God didn’t make a trade, Rosa. Max did. And he’s just a man who wanted to do something extraordinary. And he did. He brought you back to life and now I’m gonna bring him back. I chose regenerative medicine as my focus when you died. ‘Cause I was broken, and I wanted to repair the irreparable. It’s an ethics nightmare. I have been spit on by protesters and shut down by the government. I’ve worked on tiny rat hearts my whole life, waiting until someone in power would believe that I could do this with people, too. And over and over, old men on boards have told me to stay in my lane. To calm down. To wait. But I can do this!" - Liz to Rosa on bringing Max back from the dead. 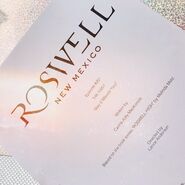 Script cover
Add a photo to this gallery

Roswell, New Mexico Season 2 Episode 1 Liz And Isobel Talk At The Funeral Scene The CW
Add a photo to this gallery

Retrieved from "https://roswell.fandom.com/wiki/Stay_(I_Missed_You)?oldid=17106"
Community content is available under CC-BY-SA unless otherwise noted.