So Much for the Afterglow

So Much for the Afterglow

"Every story varies depending on who's telling it, and my sister's story died with her a decade ago. I would give anything to be able to ask her why she made the choices that she did. To understand her. But like so many who died before their time, Rosa took her truth with her. And I'm left here, endlessly searching for it."
―Liz, opening narration

So Much for the Afterglow is the second episode of The CW series Roswell, New Mexico. It first aired on January 22, 2019.

THE 10TH ANNIVERSARY OF ROSA’S DEATH — The anniversary of Rosa’s death reignites tensions as the town takes aim at Liz and her father, Arturo, for what happened on that fateful day 10 years ago. Meanwhile, Max confronts Michael and Isobel, who are concerned that his feelings for Liz will expose their secret. Elsewhere, Master Sergeant Manes’ attempt to convince Kyle of the alien conspiracy in Roswell takes an unexpected turn. Finally, Liz and Kyle make a shocking revelation about Rosa’s death.

Act 1: Just after midnight, Max finds Liz visiting Rosa's grave and he drives her home. She mentions that she's going to leave town, but she asks to meet Max at sunrise at the turquoise mines for a kiss. At Project Shepherd, Master Sergeant Jesse Manes asks Kyle Valenti about the handprint he saw last week, but Kyle won't break doctor-patient confidentiality. At the sheriff's department, Jenna Cameron brings Max the footage of the Crashdown Cafe shooting from a week earlier. Jenna recognizes a truck belonging to Wyatt Long. At home, Liz hears commotion downstairs and finds Isobel Evans-Bracken and Michael Guerin, who intimidate her to make sure she keeps their secret. Max arrives and makes them to leave.

Act 2: The next morning, Liz's father Arturo Ortecho has closed the diner for the day in case of anymore attacks, and he asks Liz to find a way to forgive her sister. Michael drives back to Foster Homestead Ranch where Alex Manes putting an eviction notice on Michael's Airstream since the U.S. Air Force has officially acquired the land. Michael flirts, but Alex says that what happened before can't happen again. At Roswell Community Medical, Liz visits Kyle and asks him to pull her sister's autopsy, so Liz can see her toxicology report as part of her attempt to forgive Rosa. At their home, Isobel and Noah Bracken talk about what's going on with Max, and she gets the idea that maybe Max will open up to Michael. At a church, Max meets Liz and she asks him to show her his memories of Rosa, and he does so. As he leaves, Max tells Liz that he'll see her at sunrise.

Act 3: At the Wild Pony, Isobel asks Michael to talk to Max. Separately, Alex arrives and meets up with Maria and Liz. Liz writes down something she saw written on Rosa's hand from Max's memory, and Maria recognizes it as something Rosa wrote it on her hand the night she died. At the Long Farm, Max and Jenna arrive to talk to Wyatt Long, and they discreetly obtain some of the bullets from his gun to compare to the ones from the Crashdown shooting. At the hospital, Liz meets Kyle and learns that there was a fake autopsy on file for Rosa, but Kyle also found the real one. Rosa had a handprint over her mouth, and Kyle thinks Rosa was killed by an alien.

Act 4: At the Wild Pony, Isobel is still trying to Michael to talk to Max when they overhear Wyatt Long talking about the shooting. They decide to head to the Crashdown in case Wyatt and his friends start trouble. At the Crashdown, Max watches Arturo close up when Noah stops by and they talk. Max overhears Arturo being beat up and stops it and runs after Wyatt. At the hospital, Kyle tries to get Liz to tell him who put the handprint on her chest. In the file is a picture of Rosa's hand with the lyric on it, and Liz realizes that Max saw Rosa that night, and she abruptly leaves.

Act 5: Outside the Crashdown, Max chases Wyatt into an alley and nearly kills him with his powers, but Isobel and Michael pull him off and knock out Wyatt. Max finally talks to them about what's going on with him. At the Wild Pony, Maria asks Alex, "Who's the guy?" and she gives him some support. At the Crashdown, Liz arrives to find her father has been beaten up, and he tells her that Max saved his life.

Act 6: At sunrise at the turquoise mines, Liz and Max meet up. Liz says she doesn't feel the same way and they don't kiss. She asks when he last saw Rosa, and he lies, saying he last saw her earlier in the day before her death. At Foster Ranch, Michael is getting ready to leave when Alex arrives, and they hook up. At Jenna's home, Max visits and Jenna tells him that Wyatt is in custody, and they hook up. At the graveyard, Liz is visiting Rosa's grave when Kyle arrives. He asks again who left the handprint on her. Liz says she's staying and she's going to find out who killed her sister, and she finally gives Kyle Max's name.

Isobel: "I heard they're shutting down Foster Ranch. Is that why you're day brooding? You're gonna get another job. Maybe one that's not on the site of the crash that killed our family members in a fiery explosion."
Michael: "I like it there. I always have. When I was a kid, nights when I had to get away from whatever crap home I was in, I would hitch a ride to Foster Homestead Ranch."
Isobel: "So what would you do out there all by yourself at night?"
Michael: "Wait. Figured, that was the last place I saw my family, maybe they'd be back. Or maybe, maybe somebody would come and take me home. Oh, for a genius I was a real dumbass."
— 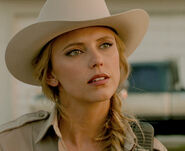 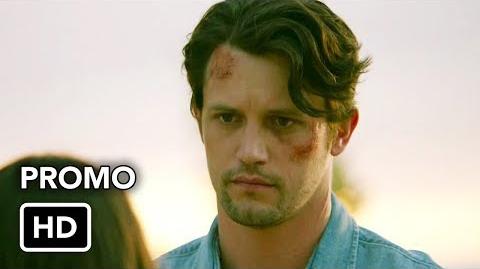 Roswell, New Mexico 1x02 Promo "So Much For the Afterglow" 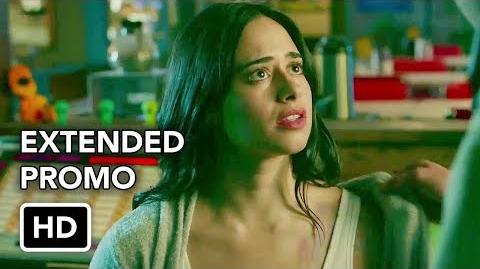 Roswell, New Mexico 1x02 Extended Promo "So Much For the Afterglow"