Where Do You Come From?
Season 3 of The CW television series Roswell, New Mexico premiered on July 26, 2021 and is currently airing Monday nights at 8:00 pm on The CW. The season will consist of 13 episodes.[1][2]

Prior to production, series creator and showrunner Carina Adly MacKenzie resigned from the series. Her co-showrunner Christopher Hollier remained on as the sole showrunner.

With Max Evans (Nathan Dean) coming face to face in the final moments of Season 2 with an alien that looks like him... Season 3 will find him, and his alien siblings, tasked to uncover who exactly this mysteries figure is. meanwhile, we’ll find our intrepid Liz Ortecho (Jeanine Mason) living out her dream job, high paid and changing the world in at a lab in California with an ocean view. But a series of events will prove that our one-time lover’s connection might not be severed for good. Which is good timing, as in addition to a mysterious alien that looks just like Max offers context to why our heroes are on Earth in the first place, a mysterious radio signal begins broadcasting across Roswell, Alex Manes (Tyler Blackburn) finds himself in the crosshairs of a new clandestine organization and Michael (Michael Vlamis), Isobel (Lily Cowles) and Rosa (Amber Midthunder) all begin exhibiting new powers. Confusing things even further is an eerie glimpse Maria (Heather Hemmens) gets of the future.... Someone they love is going to die.

In season three, still reeling from the events of last year, the Roswell aliens and their allies are drawn back together through a threat from a familiar stranger and a murder that has not yet happened. From near and from far, amidst breakups, reunions, scientific advancements and the impending death of someone they hold dear, our heroes must grapple with two central questions: Who enters our lives and defines who we are? And what power do we really have over our own futures? ROSWELL, NEW MEXICO stars Jeanine Mason, Nathan Dean, Michael Vlamis, Lily Cowles, Tyler Blackburn, Heather Hemmens, Michael Trevino, Trevor St. John and Amber Midthunder. ROSWELL, NEW MEXICO is from Amblin Entertainment, My So-Called Company and Bender Brown Productions in association with Warner Bros. Television and CBS Television Studios, with executive producers Carina Adly MacKenzie (“The Originals”), Christopher Hollier (“Once Upon A Time”), Julie Plec (“The Vampire Diaries”), Darryl Frank, Justin Falvey (“The Americans”), Lawrence Bender (“Pulp Fiction”) and Kevin Kelly Brown (“Roswell”).

The season is will have 13 episodes.

On January 7, 2020, two months before the premiere of season 2, The CW gave Roswell, New Mexico an early renewal along with twelve other series.[11]

The start of production was delayed due to the COVID-19 pandemic. On May 9, 2020, Carina Adly MacKenzie was clear that they could not return to set "until it's 100% safe for everyone on the crew".[12] On May 14, 2020, The CW revealed that their regular Fall TV season was pushed back to January 2021 as a result of the COVID-19 pandemic. Roswell, New Mexico is a mid-season series, so this also pushed back its expected release to mid-2021.[13]

On July 10, 2020, showrunner and series creator Carina Adly MacKenzie announced that she was resigning from the series due to "fundamental disagreements about a couple of things that were and are very important to [her]".[14] Seasons 1 and 2 were co-showrun by MacKenzie and Christopher Hollier. Hollier remained on as sole showrunner for season 3.

This section documents all hints from official sources about what may be included in season 3 and the show's development.

Showrunner Chris Hollier answered some questions on Twitter. From March 24, 2021:

Question 1: "What can we expect for Kyle this season? He's our comic relief and moral compass.[29]"
Hollier: "He learns more about his own mythology. And who he wants to become next. This will be a big season for Kyle."
—
Question 2: "Describe Season 3 with emojis....[30]"
Hollier: "📻 (radio) 💉 (syringe) 🗡️ (dagger)"
—
Question 3: "Three words to describe Echo this season?[31]"
Hollier: "longing / orbiting / evolving"
—
Question 4: "What is your personal plot focus, Chris? Do you like to focus on character development? Drama? Romance? Alien stuff?[32]"
Hollier: "1. Character Development
2.Romance
3. Alien Stuff"
—
Question 5: "Can you give us any hint about Malex this season?[33]"
Hollier: "There is something this season that will be paid off that was set up for them in S1."
—

Question 6: "We’re thinking there’s a new set. Could this be possibly be a beer garden to the wild pony?? If so can you enlighten us on this new development?[34]"
Hollier: "The Wild Pony has expanded its footprint, and if you look closely, we’ve already posted a picture of that."
Hollier: "I think we can reveal this -- (image of a "Take Me To Your Latte" take-out coffee cup)"
—
Question 7: "What can you tease about Rosa this season?[35]"
Hollier: "Rosa has her biggest arc on the show thus far."
—
Question 8: "How big is the time jump between the end of season 2 and the start of season 3?[36]"
Hollier: "About one year."
—
Question 9: "Few words to describe Alex’s journey this season?[37]"
Hollier: "Deeply personal."
—
Question 10: "I feel like this season is gonna be a rollercoaster. My question is, is everyone going to come out of this season alive?[38]"
Hollier: "Any good ride is full of twists and turns.....and sudden drops."
— 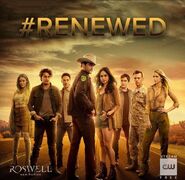