New Roswell High School is a high school that was attended by many of the main characters in The CW science fiction series Roswell, New Mexico.

In high school, Max Evans and Liz Ortecho were biology lab partners and members of the science club.

In June 2008, Max, Liz, and most of the main characters graduated.

In June 2018, the class of 2008 had its 10 year reunion, which was organized by Isobel Evans-Bracken. Kyle Valenti missed the reunion. 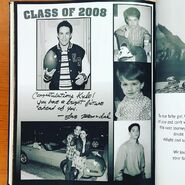