Jeffrey Hunt
Linger is the thirteenth episode of season 2 of Roswell, New Mexico and the twenty-sixth episode of the series overall. It is scheduled to air sometime in 2020 and is also the season finale.

Official synopsis for Mr. Jones from The CW:

SEASON FINALE — Having realized that a deadly threat has infiltrated CrashCon, the busiest event of the year, Liz (Jeanine Mason) realizes that she can’t save everyone she loves — and with Max (Nathan Dean) facing immediate danger, she and Isobel must make a heart-wrenching choice. Meanwhile, Michael (Michael Vlamis) finds himself caught up in the conflict between Jesse (Trevor St. John) and Alex (Tyler Blackburn) once again, even as Maria’s (Heather Hemmens) life hangs in the balance elsewhere, and Kyle (Michael Trevino) faces a moral dilemma when the enemy requires medical attention. 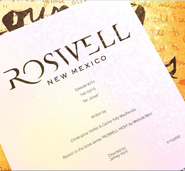 Retrieved from "https://roswell.fandom.com/wiki/Mr._Jones?oldid=17303"
Community content is available under CC-BY-SA unless otherwise noted.