Mimi DeLuca is a character on The CW science fiction series Roswell, New Mexico. She is the mother of Maria DeLuca and she is suffering from an unknown mental disorder.

Mimi is a palm reader and psychic, and her daughter Maria takes after her. It is suggested that she does have some real psychic abilities, such as being able to read auras and having clairvoyant insight into people. With her mental deterioration, she also believes that the events of the movie Independence Day actually occurred. It is occasionally unclear whether what she says is psychic insight, highly developed (but normal human) awareness, or part of her mental deterioration.

Mimi went to school with Jesse Manes, and she noticed the day that he "learned too much."

When Mimi's mental capacities began to deteriorate, Maria took her to many doctors, but they were unable to diagnosis the problem. Maria took over running the Wild Pony from her mother.

As Mimi's mental capacity continues to deteriorate, Maria finally makes the decision to place Mimi in an assisted living facility.[1]

Mimi regularly leaves the facility, Sunset Mesa Assisted Living, and wanders back to the Wild Pony. The facility gives Maria a call when this happens, and Maria takes her mother back. One night, as Mimi is leaving the facility again and heading toward the Wild Pony, a bright light shines on her from an unseen source, and she doesn't arrive at the Pony as anticipated.[2] 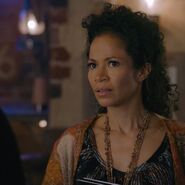 2.12 Mimi
Add a photo to this gallery

Retrieved from "https://roswell.fandom.com/wiki/Mimi_DeLuca?oldid=17522"
Community content is available under CC-BY-SA unless otherwise noted.