Michael Vlamis is an American actor who portrays Michael Guerin on The CW's Roswell, New Mexico.

Prior to Roswell, New Mexico, Vlamis made his television debut as "hipster jerkwad" in an episode of Fox's New Girl (2013, episode 2.13 "Tinfinity"). He's done various shorts and commercials.

Michael is an actor/filmmaker from Chicago currently starring in the CW series, Roswell, NM. He made his debut alongside Zooey Deschanel in New Girl and the Blackpills series he recently starred in, Simi Valley, was nominated for best drama at the 2018 Streamy Awards. In addition to acting, a film he wrote, produced, and starred in, Meme! True Hollywood Story, won the 2016 Tribeca Film Festival. His latest feature film, 5 Years Apart, which he produced and starred in alongside Chloe Bennett, which premiered in 2019. Michael is theatrically represented by CAA and Grandview.

On March 5, 2018, it was announced that Vlamis was cast as Michael Guerin for Roswell, New Mexico, which is his first starring television role.[2][3]

Vlamis sells merchandise on his website, some of which is inspired by his role on Roswell, New Mexico.

At the ATX TV Festival panel in June 2019, regarding Michael's romances with Alex and Maria over season one:[8]

"I had a lot to say about relationships and lost love when I booked this show, and to have two people to share that with was amazing. One is rooted in pain and the other in hope, and I got to play both sides of the spectrum. Not a lot of people get to do that, and the fact that they trusted me with that was a blessing."

Vlamis has been vocal about enjoying kissing co-star Tyler Blackburn on the show. In response to the question, "How does it feel to kiss Tyler Blackburn?" Vlamis responded:[9]

"How you think it feels? Is exactly how it feels. Tyler Blackburn is a phenomenal kisser. He was the first man I ever french kissed in my life, and I'm not gonna lie, I enjoyed it. He had some scruff though, that burned a little bit, but the lips were very smooth and he knows how to use his tongue."

Regarding portraying his onscreen relationships with Heather Hemmens and Tyler Blackburn:[10]

On representing the LGBTQ+ community:[10]

"I knew there was a lot behind it. Our showrunner, Carina MacKenzie, this meant a lot to her, she wanted to do it right. You don't see a lot of bisexual love triangles on television. This has meant a lot, and I know it's meant a lot to the fans. The amount of messages I've gotten, and people just talk about these relationships on the show. People have come out to their families because of our show. And they send those messages. And so that has been the most rewarding for sure."

On his familiarity with the original Roswell show and Roswell High books:[11]

"I was familiar with the 1947 UFO crash in Roswell, but I hadn’t seen the show or read the novels. Once I booked the role, I did research on both to have a feel for the original properties, but I preferred to not dive in too deep, especially not into the original character. It was easier to bring a fresh take that way. Ignorance is bliss. But I have heard the original Michael and myself both have wild hair. So there’s a similarity." 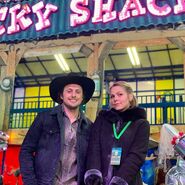 2.12 Behind the scenes: Michael Vlamis and Lily Cowles 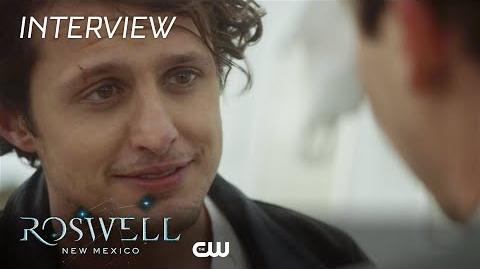