Michael Guerin is one of the main characters on The CW science fiction series Roswell, New Mexico. An alien trying to escape Earth, he is troubled but brilliant due to a traumatic childhood. Michael is portrayed by Michael Vlamis.

Michael has fair skin with curly brown hair. He typically dresses in jeans, cowboy boots, and a cowboy hat.

In season 2, Michael gets a tattoo of an alien symbol on his right forearm just beneath his elbow.

In 1997, Michael awoke from his pod along with Max and Isobel. The three of them were found walking down the road. At the group home at the approximate age of 7, Isobel and Max were adopted by the Evans couple, while Michael was left behind in foster care. Although Isobel and Max were raised separately as twins, the three of them still considered each other siblings.

As a kid in the foster system, he would occasionally run away from whatever home he was in and hitch a ride to Foster Homestead Ranch, which was the last place he saw his family.[2]

In 2004 at the approximate age of 12 or 13, he had an exorcism performed on him at a group home. His anger made his powers manifest involuntarily and move furniture, and he was "angry a lot." A week later, he went camping with Max and Isobel for their 13th or 14th birthday. Isobel was attacked by a drifter, and Max killed the drifter in self-defense. Michael used his telekinesis to bury the body.[1]

At the end of high school in June 2008, he got involved with Alex Manes. Alex's father Jesse Manes caught them together and started to attack his son, but Michael intervened, and Jesse broke his hand with a hammer. Later that night, Michael got a telepathic distress call from Isobel, and he arrived to her location in time to see her kill Rosa Ortecho. He takes responsibility to shield Isobel from the truth, and he and Max help cover up the murder by staging a car accident.

Despite his lingering feelings for Alex, in present day, he chooses to not be with him, as he ultimately feels that they aren't good for one another.[3] Later, he tells Alex that he does want to read the file he has on his birth mother, but doesn't want to work with him. He eventually confesses that he wants to be with Maria DeLuca.[4]

Michael is alien with paranormal abilities whose specialty seems to be the ability to move objects with his mind. 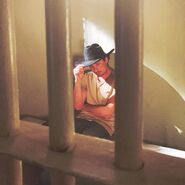 "Nostalgia's a bitch." - Michael to Alex in Pilot

"All my life, the system has put me at the mercy of criminals. I'm just trying to survive it." — Michael to Alex in Tearin' Up My Heart.

"All our years of this, I’ve never said no to you. You push me away, you pull me back in, and I go where you want me. I don’t want that anymore. I don’t want to keep hoping that maybe this time you won’t go. I don’t want to play your guitar. I don’t think we’re good for each other Alex, and I want to be good for somebody." - Michael to Alex on needing to move on in Stay (I Missed You).

"Hope screws people up. Hoping that your family will come and save you from the system. Hoping that anyone can be saved at all." - Michael to Maria on why hoping is bad in Stay (I Missed You).

“Life sucks Ortecho. Everybody dies, nothing’s fair, and the oceans are full of garbage.” Michael to Liz inside their jail cell in Ladies and Gentlemen We Are Floating in Space.

Retrieved from "https://roswell.fandom.com/wiki/Michael_Guerin_(2019)?oldid=18062"
Community content is available under CC-BY-SA unless otherwise noted.