Manes has been aware of the existence of aliens in Roswell and continues to look for them. He is in charge of Project Shepard. 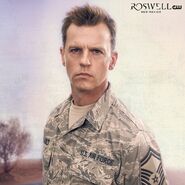 "Our families have long been in the business of keeping people safe. And for the past 70 years, your ancestors and mine have led an operation to protect this town. This entire planet." — Manes to Kyle in Pilot.

"They are a violent race. They despise compassion. They despise freedom, love, and they thrive on our tragedy. They are, at their very core, killers." — Manes to Kyle in Pilot.