Good Mother is the third episode of season 2 of Roswell, New Mexico and the sixteenth episode of the series overall. It first aired on March 30, 2020.

Act 1: In the cave, Michael helps the pod's regenerative process to improve Max, and Alex will continue looking into the files on Michael's mother. Returning to Roswell on I-40, Jenna Cameron nearly hits Mimi DeLuca who's wandering in the road. The next morning, Michael makes Maria breakfast and they talk. Isobel runs by, and Maria gets word that her mother's been found, so she quickly takes off. At Max's place, Liz brings Rosa art supplies before leaving for the day. At the hospital, Cameron debriefs Sheriff Valenti about finding Mimi, and the Sheriff tells Cameron that Max is MIA. At her home, Isobel clears out photos of Noah and gets another notification about the size of her fetus, so she takes a larger dose of the serum, and a vision of Max appears to her.

Act 2: Vision-Max cautions Isobel against taking the serum and suggests calling Valenti, but Isobel is set on doing this herself. Cameron finds Michael and asks about Max's whereabouts. At the hospital, Maria asks her mother where she's been for a month, but Mimi thinks she left the facility just the night before. Alex checks on Project Shepherd bunker and finds a file left from Flint. Liz is working in her new lab when Jenna arrives, sent there by Michael. Liz tells her about her plans to save Max, and they bring out the alcohol.

Act 3: At the hospital, Alex visits Jesse Manes who's now awake. Alex appeals to his father, saying things are over with Michael and that he didn't understand, to get him to open up, and he starts talking about someone named Tripp. Rosa hears Max's voice, so she starts drinking to get him to quiet. Outside the lab, Jenna and Liz walk around and drink, and Jenna reminisces about her sister. At her home, Isobel is puking but not bleeding, and she asks Vision-Max if he knew he was going to kill himself saving Rosa, but Vision-Max reassures her that he wouldn't have left her. Sheriff Valenti arrives with questions. At the Wild Pony, Maria hears a crash and goes to investigate, and she finds Rosa.

Act 4: Maria thinks she's seeing things, but Rosa begins to explain with, "Do you believe in aliens?" Outside the lab, Jenna lets Cameron fire her sidearm, and they make fun of Max's quirks, and Liz is angry that Max didn't ask her about saving her sister before he did so. At Isobel's home, Sheriff Valenti questions Isobel about the circumstances of Noah's death, since the crime scene photos show ligature marks around Noah's wrists and ankles. Isobel brings out a trunk filled with sex toys, and holds up metal handcuffs, which would account for the ligature marks. Valenti leaves, and Isobel and Vision-Max start joking around about what she just did, but Isobel gets sad about how much she misses Max. Isobel starts coughing up blood.

Act 5: Vision-Max encourages Isobel to take the antidote, but she refuses because the pregnancy hasn't ended. At the Wild Pony, Michael comes to see Maria, and he sees Rosa sleeping there as well. Maria, who now knows what's been going on, angrily tells him to leave, but there's something he needs to tell her. Isobel begins bleeding profusely, but she passes out before she can finally take the antidote. The real Max appears to Rosa, asking her to check on Isobel because he senses that something is wrong. Liz and Jenna talk about finding out about Max being an alien. Rosa calls Liz, asking Liz to go get to Isobel because she thinks something's wrong, and Jenna volunteers to drive. Liz arrives at Isobel's and finds her bleeding on the floor, so she injects Isobel with the antidote.

Act 6: Isobel apologizes for Liz getting involved. Liz tells Isobel that Max is the reason Liz came, and Max is still with her. At the hospital, Maria visits her mother again, and puts her necklace, that her mother says protects her, on her mother. Liz arrives and Maria angrily confronts her about the secrets, saying she needs time, and she tells Liz that Rosa was wasted and she needs her. At Max's place, Liz returns and Rosa starts crying because she couldn't stay clean, and Liz comforts her.

At Sanders' Auto, Alex visits Michael with more information about the night of the crash. In a report, a soldier nicknamed Tripp confronted an alien woman fitting the description of Michael's mother, and the woman got away with pods in the back of a stolen military truck and drove off. Alex will continue looking for information in the files. Michael shows Alex an old issue of the Gazette that he got from the library, and it has a picture of his mother in it.

In 1947, Nora and Louise drive the stolen military vehicle with the children's pods in the back, and they find Bronson, who offers them help.

Jenna: "Where did you come from?"
Mimi: "Like you said. Nowhere."
—
Max: "Our parents sure picked a fine place to crash a flying saucer."
—
Max: "I think you'd be a really good mom, Isobel. You don't have to do this."
Isobel: "Motherhood isn't what this is about."
—

Vision-Max
Add a photo to this gallery 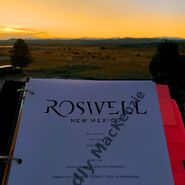 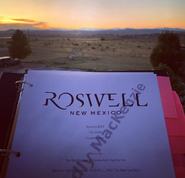 Retrieved from "https://roswell.fandom.com/wiki/Good_Mother?oldid=18150"
Community content is available under CC-BY-SA unless otherwise noted.