Give Me One Reason

Give Me One Reason is the second episode of season 3 of Roswell, New Mexico and the eighth episode of the series overall. It is anticipated air on August 22021.

Official synopsis for Give Me One Reason from The CW: 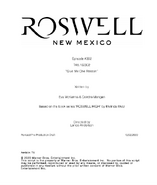 Script title page
Add a photo to this gallery

Retrieved from "https://roswell.fandom.com/wiki/Give_Me_One_Reason?oldid=19315"
Community content is available under CC-BY-SA unless otherwise noted.