It was previously named the Atomic Malt Shoppe.[5]

The Crashdown is a diner-style restaurant owned and operated by Liz's father, Arturo Ortecho. Liz and her sister, Rosa, worked at the restaurant as teenagers. The Ortecho family lives on the second floor above the restaurant.

After Rosa's death, the diner has been vandalized on the anniversary of her death.

In 2019, half of the diner ownership was still in Helena Ortecho's name, although she and Arturo had been separated for over ten years. Arturo reached out to her, asking her to sign her half of ownership over to Liz, so that Liz could sponsor Arturo's request for citizenship. Helena eventually did so, giving Liz ownership of her half of the diner.[6]

In 1947, it was called the Atomic Malt Shoppe. Roy Bronson would deliver produce from the Long farm. It's there that Roy met Walt Sanders and took him in. Later, Walt overheard Tripp Manes and Harlan Manes plan to raid the Long farm for Nora Truman and Louise.

By 1987, it had been renamed the Crashdown Cafe, and Arturo Ortecho was saving up to buy the place.

The diner is themed around the 1947 UFO crash. The wait staff wears green uniforms with head antennae. A crashing rocket is part of the diner sign. The diner features alien-themed and malt-shop style decorations, including a jukebox.

Monday through Wednesday: 7 AM - 6 PM

Thursday through Saturday: 6 AM - 9 PM

The diner serves a variety of alien-themed food, including:

The diner does not serve alcohol.[16] 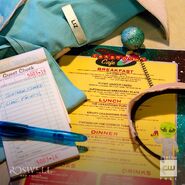 Counter, season 3 behind the scenes

Menu, season 3 behind the scenes