Arturo Ortecho is a supporting character on The CW science fiction series Roswell, New Mexico. He is Liz and Rosa's father and the owner of the Crashdown Cafe. Arturo is portrayed by Carlos Compean.

Arturo migrated to the United States illegally and established the Crashdown Cafe. His wife left when their children were young, and he raised Liz and Rosa as a single father.

"You have to find a way to forgive her. If you don't, the ghosts will follow you, and you will never really get away. Try. Por favor, amiga. For me." — Arturo to Liz in So Much For the Afterglow.

"I stopped trusting Rosa when she started to keep secrets. Not the other way around. When you girls were little, I would make churro pancakes, and you would tell me everything. About school, boys, your friends. Then, one day, she stopped talking. And she started lying. Like that. The end." — Arturo about Rosa in Where Have All the Cowboys Gone?. 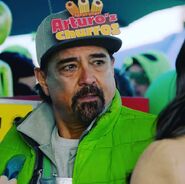 2.12 Arturo working "Arturo's Churros" at Crashcon
Add a photo to this gallery

Retrieved from "https://roswell.fandom.com/wiki/Arturo_Ortecho?oldid=17525"
Community content is available under CC-BY-SA unless otherwise noted.