Angels of the Silences

Angels of the Silences

Angels of the Silences is the tenth episode of season 3 of Roswell, New Mexico and the thirty-sixth episode of the series overall. It premiered on Monday, September 27, 2021 on The CW.

Official synopsis for Angels of the Silences from The CW:[1]

SINNERS AND SAVIORS – Liz (Jeanine Mason) and Max (Nathan Dean) race to find Heath (guest star Steven Krueger) in the hopes that he can help find a way to get Jones out of Max’s body. Meanwhile, Michael (Michael Vlamis) and Isobel (Lily Cowles) try to get through to Dallas (guest star Quentin Plair). The episode was directed by Laura Petzke and written by Danny Tolli & Onalee Hunter Hughes (#310). Original airdate 9/27/2021.

Telekinesis : Isobel use her telekinesis.

Dallas: How'd you find me?

Michael: I spent a lot of time at the place that made me feel safe as a kid, too.

Dallas: Well, I wish you hadn't wasted your energy cuz I'm not going back with you.

Michael: I get it. I was an ass. My only excuse is that when I look at you, I feel like I'm looking at a mirror.

Isobel: Well, I'll just get him to open up after one of his sermons, I guess.

Kyle: He thinks his boss is in the sky, and you want to tell him he fell from it? It'll shatter his world view. Let me gather my files and we'll do it together. I mean maybe if we show him you have the same physiology, he'll be more inclined to trust you. Before you pull the existential rug out from under him.

Michael to Isobel: You positive this guy doesn't know he's an alien? Cause I'm pretty sure he heard the brain tweet that I sent you back at the church. 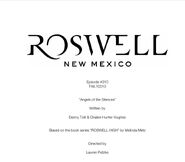