Midthunder's involvement in the series was first hinted on March 10, 2018 when a picture of Polaroids was released on Instagram as part of the early marketing for the series; Midthunder was pictured and tagged in the photo.[1][2][3] By June 2018, Midthunder had been added to the series's IMDB page as Rosa Ortecho.[4]

Two days after the first season finale aired, it was announced that Midthunder was promoted to a series regular for season 2.[5][6]

Midthunder's father, David Midthunder, is an actor and her mother, Angelique Midthunder, is a casting director. Amber is Native American on her father's side, and both are enrolled members of the Fort Peck Sioux Tribe. Amber's mother is adopted, so Amber is of unknown mixed ancestry.

Midthunder's acting career began at the age of four with a small part in 2001. She is best known for her recurring role as Kerry Loudermilk on FX's Marvel TV series Legion beginning in 2017. 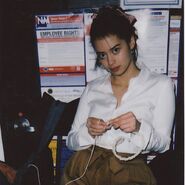 Behind the scenes of episode 2.08